A MARKET trader has scooped a national award for his traditional pork bangers.

Fishmonger Glen Furnival, known as The Fish Man of Leigh, entered the The Great British Butcher's Awards after starting his sausage company in November.

Leigh Market-based Glenn, who is also a butcher, has been handed Gold in the Best Sausage category of the awards.

Glenn said: “The traditional pork sausage is the basis for a lot of sausage products.

"We could have entered our other meats in different categories such as burgers, bacon or steak, but we chose sausages because the sausage element of the business was only set up late last year and I wanted to spread the word.

“I’m absolutely over the moon to have been given the Gold award.

"Not only is this a national award but I’m the only fishmonger to have been given Gold.

"I can officially say that Leigh’s Fish Man has some of the best pork sausages in the nation!” 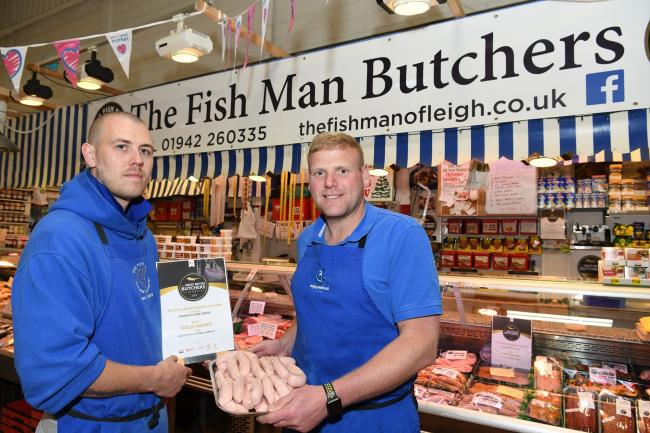 Glenn received 57 out of 60 points for his traditional pork sausages based on a range of qualities including appearance, taste, smell, texture, how the sausages cook and overall appeal.

Outstanding taste and quality are honoured above all else, with no regard to branding or packaging.

“Despite the inherent popularity of meat, this is a challenging and competitive marketplace for butchers.

Glenn’s award also comes at the end of the annual Love Your Local Market fortnight, a campaign supported by 24 countries worldwide encouraging shoppers to support small businesses and keep the market industry thriving.